You are here: PCHRD, MH Advisory Group explore spiritual dimension of mental health in a series of RTDs | Philippine Council for Health Research and Development 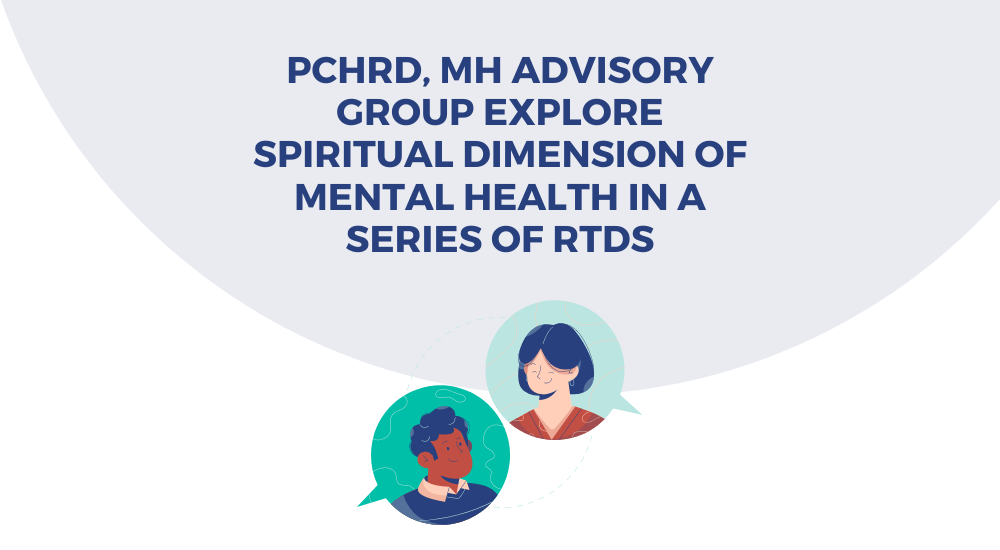 “There is a facet of mental health that is not brought into the spotlight yet.”

This is one of the realizations mentioned by Mr. Paul Ernest de Leon, R&D Division Chief of the Philippine Council for Health Research and Development (PCHRD), when the National Mental Health Research Agenda was finalized in 2019.

Extensive discussions of the “non-material” or “spiritual” dimension of health have been included in the 1983 World Health Assembly, according to the PCHRD Mental Health Research Advisory Group (MHRAG) Chair Dr. Lourdes Ladrido-Ignacio. An additional dimension has been proposed for some time now as an addition to the Biopsychosocial model of Health by George Engel, Dr. Ignacio added.

“The Philippines, despite being a very religious country, is only beginning to look at this fourth dimension through the lenses of the sciences, with the PCHRD endorsing initiatives around this area,” says PCHRD Executive Director Dr. Jaime C. Montoya.

To identify what aspects of religiosity and spirituality would be particularly relevant to mental health research in the Philippines, the PCHRD, in collaboration with the MHRAG, held a series of virtual roundtable discussions (RTDs) on religion, spirituality, and health on 12 January 2022 and 30 March 2022 via Zoom.

The first RTD was participated by eight individuals from different faiths involved in pastoral care who were chosen for their openness to the sciences and inter-faith exchange. On the other hand, the second roundtable discussion was attended by professionals from various fields: medicine, nursing, psychology, anthropology, linguistics and geography, education, and social work.

Aiming to incorporate Spirituality and Mental Health in the National Mental Health Research Agenda, in line with the Biopsychosocial-spiritual Framework, results and discussions from the first and second RTDs will be compiled and synthesized, to be presented in a third and final discussion where participants from the previous RTDs, policymakers, and the public will pick out issues that can be topics for further research.

“Although the RTDs are closed sessions, a final report will be presented in a public forum that can be used to generate more ideas, as well as immediate application, especially from institutions with their own resources.” Mr. de Leon stated during the organization of the RTDs.

“We believe that through discussions like this, we can expand and further investigate the current research interests, gaps, or challenges in connection with the spiritual dimension of this discipline,” Dr. Montoya added.

The Philippine Association of Medical Journal Editors (PAMJE) Inc. with support from the Department … END_OF_DOCUMENT_TOKEN_TO_BE_REPLACED

Extended until June 17, 2022: Call for Submissions: The Gelia Castillo Award for Research on Social Innovations in Health

Call for Proposals: Consultancy Services for the Implementation of the 2022 PhilHealth Client Awareness and Satisfaction Survey

Long Term outcomes of Diagnosed Tuberculosis Cases in the Philippines

REPUBLIC OF THE PHILIPPINES
All content is in the public domain unless otherwise stated.
FREEDOM OF INFORMATION
Learn more about the Executive Order No. 2 - The order implementing Freedom of Information in the Philippines.
ABOUT GOVPH
Learn more about the Philippine government, its structure,
how government works and the people behind it.
Executive
Legislative
Judiciary
Other Agencies
Copyright © 2022 Philippine Council for Health Research and Development
We use cookies on our website to give you the most relevant experience by remembering your preferences and repeat visits. By clicking “Accept All”, you consent to the use of ALL the cookies according to our data privacy policy.
Cookie SettingsAccept All
Manage consent

This website uses cookies to improve your experience while you navigate through the website. Out of these, the cookies that are categorized as necessary are stored on your browser as they are essential for the working of basic functionalities of the website. We also use third-party cookies that help us analyze and understand how you use this website. These cookies will be stored in your browser only with your consent. You also have the option to opt-out of these cookies. But opting out of some of these cookies may affect your browsing experience.
Necessary Always Enabled
Necessary cookies are absolutely essential for the website to function properly. These cookies ensure basic functionalities and security features of the website, anonymously.
Functional
Functional cookies help to perform certain functionalities like sharing the content of the website on social media platforms, collect feedbacks, and other third-party features.
Performance
Performance cookies are used to understand and analyze the key performance indexes of the website which helps in delivering a better user experience for the visitors.
Analytics
Analytical cookies are used to understand how visitors interact with the website. These cookies help provide information on metrics the number of visitors, bounce rate, traffic source, etc.
Advertisement
Advertisement cookies are used to provide visitors with relevant ads and marketing campaigns. These cookies track visitors across websites and collect information to provide customized ads.
Others
Other uncategorized cookies are those that are being analyzed and have not been classified into a category as yet.
SAVE & ACCEPT
PCHRD